Be Bold, Be Strong 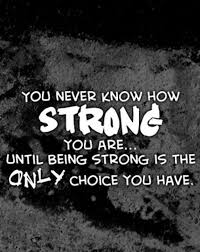 Gerry (not his real name) has been a Product Manager for over four years. He wants a promotion to Senior Product Manager which would include a huge salary increase. Suggestions to Gerry included being more visible to Senior staff who could facilitate this promotion. Well, Gerry is a quiet kind of guy. It went against all he believed in to promote himself. Gerry was slow in realizing that the world is changing and if you want it, you have to let others know that – especially the people who have the power to promote. He told his friends and family about the position he wanted, yet could never muster up the confidence to talk to his boss’s boss about his desire to attain this new position.

Gerry did not get the promotion to Senior Product Manager. He was beat out by someone who had made a concerted effort to get that new position with its large pay upgrade. Gerry lost out on the promotion and the significant salary increase because he wasn’t’ willing to do what it takes to get what he said he wanted.

My father didn’t stop his creative flow until near the end of his life. John was born in Brooklyn, New York, into a very difficult life. At the end, he broke his leg after the sun glared in his eyes as he was walking, tripped on the edge of the sidewalk and broke his leg. He was in recovery for a long time because when you are on your back in a physical therapy environment, things slow down. What slowed down for him was his heart.

He lost weight, was shuttled back and forth across the state for health care and maybe anyone else would have given up right then. Not John.

When he got his wits about him, he decided he wanted to go back to his hometown to see his remaining big sister, who was also not well. He did not want to die where he was, far from what he considered to be his true home.

There was no one who could say this was a good idea. His and other physicians said it couldn’t be done, said he would never be allowed on a plane. Somehow, as only John could do, he got onto a plane, came out on a gurney over a thousand miles later, was picked up and driven directly to a hospital.

He stayed at the hospital until he passed away just a couple of weeks after he landed. His goal was going back to his childhood home and he made it.

He never gave up.

How far will you go to live your dream?

Do you give up too soon?

Do you cope well with difficulties?

Will you follow your dreams until the end of your life?

If you need a bit of support and insight, check out my latest-