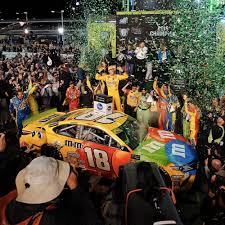 But that’s not all. Kyle Busch is the winningest NASCAR driver of the last decade; he is also one of two current NASCAR drivers to win multiple Championships. Kyle Bush won the 2015 NASCAR Championship as well as the 2019 Monster Energy NASCAR Cup Series Champion, PLUS having the most driver points in 2019.

Yet he said he did not do it alone. He has his employer, JGR Racing, and his team with Adam Stevens as Crew Chief, and they all worked together to make this 2019 Championship happen.

None of us gets there by ourselves. And Kyle Bush – unknowingly – used the Life/Work Harmony foundation to get there.

Kyle was clear, confident, had boatloads of fun along the way and was successful, including status and money. Busch said he did not know exactly what his earnings would total since he is paid by his racing team, which is, in turn, paid by sponsors. His current lead sponsor is Mars, Incorporated, followed by Interstate Batteries.

Kyle Busch also contributes to his community. Kyle Busch and his wife, Samantha Busch operate a foundation called the Bundle of Joy Fund, which advocates for infertility education and providing funds for those couples who require fertility treatments.

So far, the Bundle of Joy Fund has granted over half a million dollars to prospective parents, birthed twenty-three babies, with five more on the way.

Kyle and Samantha Busch also own KBM Motorsports, an American professional stock car racing team that currently runs in the Gander RV and Outdoor truck series. KBM Motorsports is a serious contribution to the field of racing as Kyle Busch has been a part of racing his entire life, starting with his father, Tom Busch, himself a former race car driver.

To say that Kyle Busch contributes time to his community is to minimize his giving. Whenever possible, he, his wife and son, Brexton Busch, take the all needed vacation that Kyle and his family deserve.

The best leader – Joe Gibbs; the best ‘product’, Kyle Busch and loads of financial support. What else is there?

Need help with your new business?