Kyle Busch Has a Huge Life Vision and So Can You 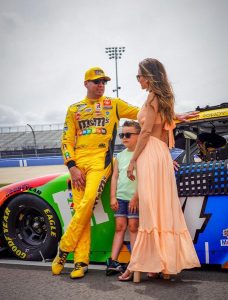 Kyle Busch, two-time NASCAR Series Cup Champion, joined NASCAR royalty as the driver recently won his 100th Xfinity race, becoming the only driver in this century to reach this achievement in the series.

For the uninitiated in NASCAR racing, the Cup series is the top and Xfinity is right below it, with a few other series below these as a driver must go through each series to make it to the top.

Two other drivers that won triple-digit Busch/Xfinity races, NASCAR Hall of Famers Richard Petty and David Pearson,  did so in the last century.

Busch’s first Xfinity Series win came in 2004 at Richmond Raceway, and he now has 51 more victories than the next closest driver on the Xfinity wins list, which is Hall of Famer Mark Martin at 49, who no longer drives in NASCAR.

At 36-years-old, Kyle Busch is already one of the most decorated NASCAR drivers with the most all-time wins in the NASCAR Camping World Truck Series (61) and the most wins across NASCAR national series history (219).

How did Kyle Busch accomplish this and other feats? He had a huge vision for his life; some would say a Vision with a Capital V!

Within that vision included the goals of winning at least 100 Xfinity trophies as well as 100 Truck series trophies. No others created such a goal; if they won, they won. Kyle Bush made a declaration about his goal.

Kyle Busch may have won his 100th race sooner, however, NASCAR limited his and some other Cup series drivers from driving in the Xfinity series..he was winning too many races, and the powers that be did not like it. His winning filled seats, however, there is always some impediment in our way to Super Success. You know who or what they are in your life. This is where patience enters your life.

Kyle Busch formed the Kyle Busch Foundation early in his career. He and his family have also created much press and success with the “Kyle and Samantha Busch Bundle of Joy Fund,” which benefits in-need families struggling with infertility.

So why should you care about this race car driver?

Because if he can do all that he has done, so can you. Kyle comes from humble beginnings and still remains humble; he created a huge Vision that many others could join.

What is your Life Vision? How big is it? I always say, the bigger the better, so others can engage and play with you.

If you want help in creating your Vision with a Capital V, check in with me here.